Here is the link. FaceNiff is a very popular Android sniffing tool for intercepting Android Web Sessions. Download FaceNiff and start intercepting sessions on your smartphone. It’s not secure anymore to connect your phone to any open Wi-Fi network. When you ' start ' the FaceNiff, it will monitor all the network traffic over the WiFi, then it will capture unencrypted session ID cookies from the websites. Then it will allow you to enter victims account as him/her. The exact working of FaceNiff can be called as Session Hijacking.

FaceNiff is an Android app that allows you to sniff and intercept web session profiles over the WiFi that your mobile is connected to. It is possible to hijack sessions only when WiFi is not using EAP, but it should work over any private networks (Open/WEP/WPA-PSK/WPA2-PSK) 30. FaceNiff: Session Hijacker for Android Your Facebook account is at risk. Just like a Firesheep (for Firefox hacking), there is a FaceNiff for hijacking the session of famous social networking websites includes Facebook and Twitter.

It’s not secure anymore to connect your phone to any open Wi-Fi network. If you’re going to login to your social or financial accounts using open Wifi network, then you might get in trouble. There’s different apps in the market that sniff packets and all the credentials are grabbed in an unencrypted form. FaceNiff is one of that apps, which is very powerful in it’s functionality.

Faceniff is an advanced Android hacking tool for hackers, pentesters and other users whoever concerned about the security and also want to know the authenticity of their network for various vulnerabilities. It turns Android smartphone into a packet sniffer. This Faceniff sniffing app enables a hacker or pentester to steal any sensitive information like social media usernames and passwords and other financial personal data by intercepting the web sessions (Man in the Middle MiTM attack). It’s very powerful tool that it works over 80% of the websites and about other 20% websites using HTTP Strict Transport Security (HSTS) which requires few other steps to work with like SSLStrip2 integration.

All the social websites like Facebook, Twitter and other big brand websites are on secure layer using the SSL HTTPS layer. Over the secured websites, a HSTS protocol secures the website against all the attacks. If you are targeting a secure website with HTTPS, you can force the victim browser to divert back to HTTP with SSLStrip.

How to Sniff Packets using FaceNiff?

Have you ever been worried about your internet security? Would you like to analyze your own internet security? Then you will be happy with what DroidSheep has to offer. This software was actually developed as a security app. The developer acknowledges that it was meant for testing the security of online accounts and it was based on his Bachelor thesis titled “Session Hijacking on Android Devices”.

DroidSheep [Root] is an Android application that analyzes security in wireless networks and also captures Twitter, Linked, Facebook, and other accounts. You can install DroidSheep in your Android phone and use it to analyze the security of any public network. Take your friend to a public network and allow him to access his Facebook account through the same network. DroidSheep will allow you to browse on your friend’s Facebook account using his identity. You can read his private messages, write wall posts, write messages, remove his friends and even delete his Facebook account without getting in touch with him.

The above example demonstrates DroidSheep [Root] simplicity of session hijacking, especially within a Wi-Fi Network. With just a single click, your eBay, LinkedIn, Amazon, Twitter, Facebook, LinkedIn, and any other online account will be taken over by an adversary and you will remain defenseless. Even the developer was frightened and surprised by using it on any public network or Wi-Fi and decided to develop anti-spoofing tool Droidsheep Guard. DroidSheep Guard is an Android application that monitors Android ARP-table. Its main function involves trying to detect the ARP-Spoofing on networks. A perfect example is an attack by FaceNiff, DroidSheep or any other software. 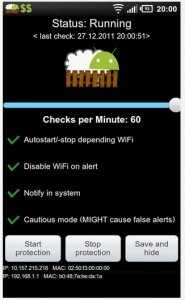 DroidSheep was neither made for hijacking other person’s accounts nor for using it in the public networks. Do not download and install DroidSheep to use it as a tool for gaining unauthorized access to other person’s online accounts or to harm anybody in any way. You should only use it to analyze your personal network security and determine the poor security properties of the network connections without encryption.

How to turn off automatic start up for logmein on mac. droidsheep-14.apk

§ How To Create A Folder On Word For Mac

§ How To Get Winzip For Free